Manchester United welcomes Atletico Madrid to Old Trafford on Tuesday for the second leg of their last-16 Champions League!

Manchester United will be aiming to secure their spot in the quarter-finals of the UEFA Champions League when they welcome Atletico Madrid to Old Trafford in the second leg of their last 16 ties on Tuesday night. 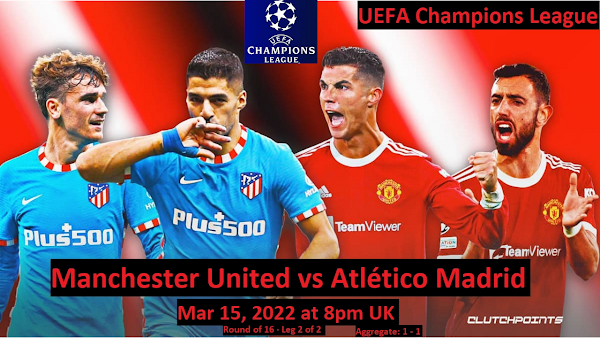 The tie is delicately poised at 1-1 after Anthony Elanga came off the bench in the first leg to equalize for Manchester United. Ralf Rangnick's side was far from their best at the Estadio Wanda Metropolitano, but their confidence was boosted by their 3-2 victory over Tottenham on Saturday. Cristiano Ronaldo's hat-trick led the Red Devils to win over Spurs, and he will be looking to enjoy further success against Atletico in the UEFA Champions League.

Atletico Madrid has enjoyed a strong upturn in form as of late, and their 2-1 victory over Cadiz on Friday means that they are in the top four of LaLiga Santander at a critical stage of the season.

Looking at the team news, Manchester United will again be without Mason Greenwood due to a club suspension, while Bruno Fernandes and Luke Shaw could miss out with COVID-19. Meanwhile, Scott McTominay looks set to return from the calf problem which kept him out on Saturday.

As for Diego Simeone's side, Yannick Carrasco is unavailable due to suspension, while Matheus Cunha, Daniel Wass, Sime Vrsaljko, Thomas Lemar, Mario Hermoso, and Geoffrey Kondogbia are all injured. Jose Maria Gimenez is a doubt for the clash after being forced off injured against Cadiz, but Koke returned on Friday night and is expected to start at Old Trafford.

Manchester United vs. Atletico Madrid: When does it start?

This Tuesday's match between Manchester United and Atletico Madrid kicks off at 20:00 GMT, the local time in the UK. You can tune in at 16:00 ET / 13:00 PT for those living in the USA.